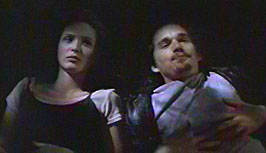 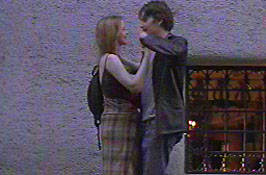 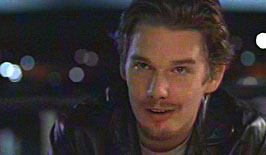 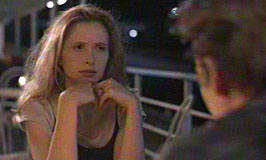 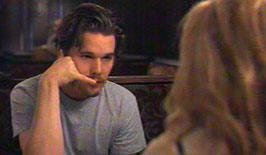 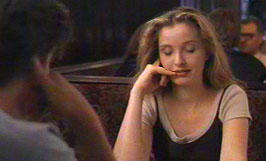 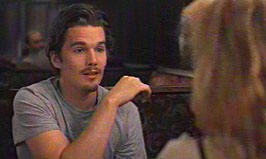 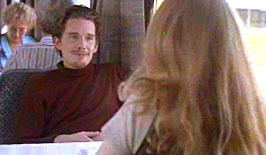 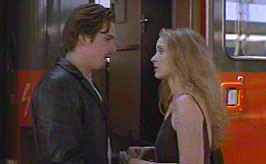 A guy and girl get to know each other in Vienna, during a 24 hour date.

With “Before Sunrise” director Richard Linklater has created a special dating movie.

Tagline: “Can the greatest romance of your life last only one night?”

Director Richard Linklater, with BEFORE SUNRISE, has created a special dialogue-driven dating movie. During most of the film, the basic story follows a cute young couple through a long, first date. A French grad student, Celine (Julie Delpy), and an American boy, Jesse (Ethan Hawke), meet on a Budapest-Vienna train. It starts with a chance encounter in the afternoon on the train, and goes throughout the night and until the early morning, turning into a 14 hour date.

Considering that Linklater’s previous films were SLACKER and DAZED AND CONF– USED, BEFORE SUNRISE is a surprisingly mature work. Ironically, the twenty-something audience this film was aimed at stayed away in droves from this film during its original theatrical run.

One of the film strengths is that it captures the flavor and fluid structure of a first date, hooking the audience with “intriguing conversations” and the couples’ spontaneity. You get to know the characters as they get to know each other, just like a first date, “as the two share in their love for the unrehearsed and their appreciation for the unexpected as they explore in a powerful meeting of hearts and minds.” – Hong Kong Arts Center.

The well cast movie has cute romantic moments. My favorite scene, takes place early on in the film, on a train. Charming young passenger, Hawke, makes an amazing pitch for Delpy to spontaneously get off the train with him, involving time travel and her future regret about missing an opportunity to spend time with the “right guy.” It’s the kind of crazy pitch that only a young guy would try, and only a young girl would go for. Oh to be young! 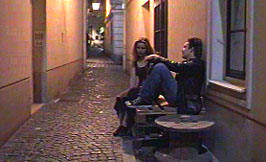 Lee Daniel did a terrific job with the cinematography, especially with his effective lensing of the atmospheric Vienna locations, which enhances the viewing experience.

BEFORE SUNRISE is popular with people who enjoy romance films, that are unpretentious and grounded in realism. Although the pacing is slow at times, it’s appropriate, creating the right overall mood of the all-night date. “Before Sunrise” even has suspense, making the viewer guess if the couple will end up with each other. Romantics will be well satisfied by the ending. * Parents need to be wary. It is rated R. – Sexual content, language. Their ideas about sex that are expressed are not for family viewing and not for those under 17.

If you enjoyed BEFORE SUNRISE, you may like WHEN HARRY MET SALLY, AMERICAN GRAFFITI, TWENTY DATES, MY DINNER WITH ANDRE, and ANNIE HALL.