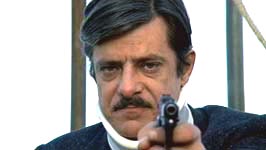 Tagline: Life gave him nothing, except the courage to win…and a woman to love.

Zack Mayo (Richard Gere), a loner with a user mentality he learned from his father, joins the Aviation Officer Candidate School, where he is tranformed into a team player who cares about others because of a tough drill instructor (Louis Gossett), his friends and a special girlfriend, Paula Pokrifki (Debra Winger), who was a local girl, perhaps looking for a way out of her dead-end future.